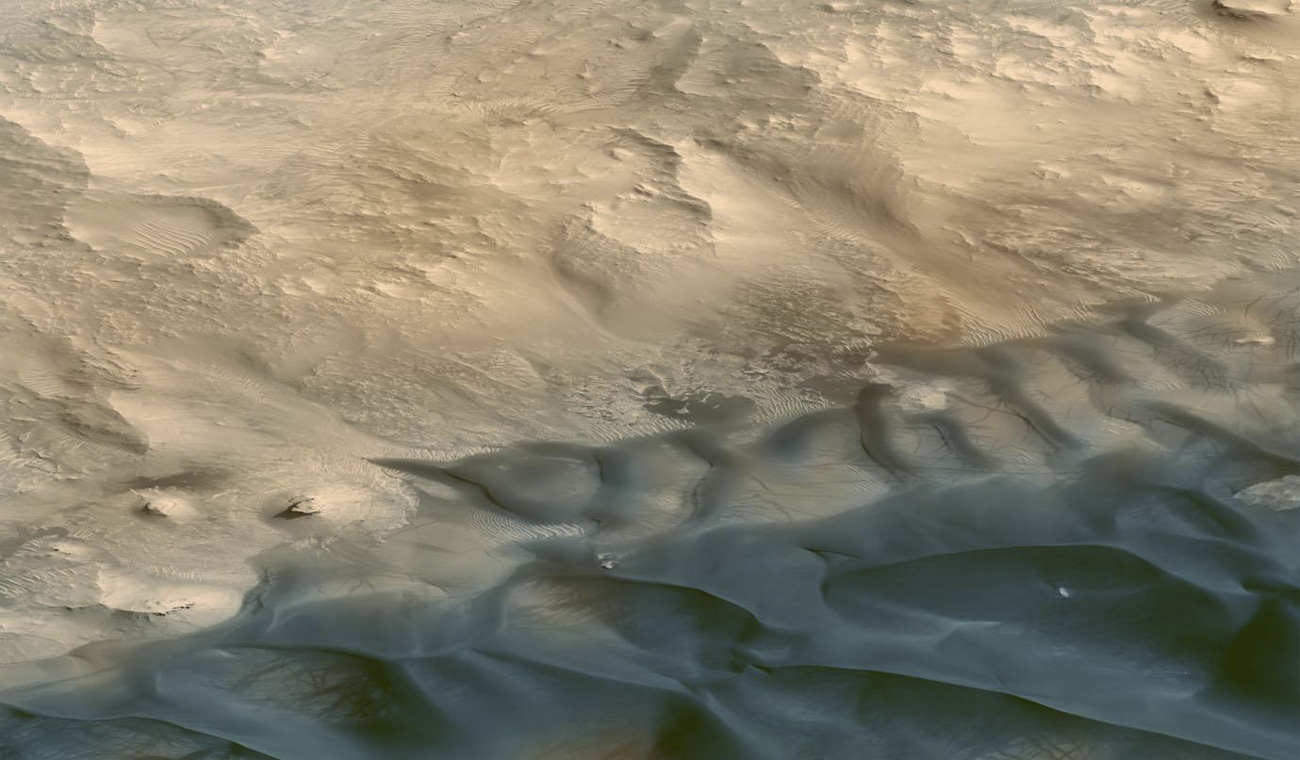 New presentation of the photography collection on 15.09.2012 from 6pm

“But as the human being withdraws from the photographic image, exhibition value shows its superiority over cult value for the first time.” (Walter Benjamin)

The Arthur de Ganay Collection, which is open to the public, takes up this aspect of photography, directing its focus on landscape and architecture photography so as not to distract the observer through what Benjamin called the “cult of remembrance”.

One of the main aims of the collection is to contribute to the broader acceptance of photographic art. The carefully assembled selection of works endeavours to demonstrate the equal standing of the photographic art with painting in the field of the visual arts.

On the occasion of the six-year anniversary of the Arthur de Ganay Collection, recent acquisitions will be exhibited in a new context with works from the existing collection. Thus, with two works from Thomas Ruff’s ma.r.s series – authorless NASA satellite images of the planet Mars which have been artistically manipulated – the scope of the photographic art is expanded considerably.

A new ensemble on the theme of abandoned places will be shown with works by Sarah Schönfeld, Laurenz Berges and Götz Diergarten. These works are drawn from a younger generation of fine art photographers who uphold the traditions of conventional photography while exploring new motives to achieve a markedly modern form of melancholy. A work from the In The Night series by artist Susanne Schuricht uses consistent abstraction and reduction of formal means stripped to their essence not to imitate reality, but rather to point beyond it. The landscapes of Elger Esser, the images of the Paris Opera by Candida Höfer, the interior photographs of Cologne Cathedral by Thomas Struth and the architectural shots by Hiroshi Sugimoto form further ensembles which are already considered classics of the collection.

In a loft space in Berlin’s Kreuzberg district purchased specially to house the collection, the French architect Arthur de Ganay has for the last six years presented some of the most important representatives of German fine art photography from the 1990s to the present day, as well as other contemporary works. Every first Saturday in the month, the collector himself gives a personal guided tour through the gallery.

From a digital city model to aerial image isometry

With the creation of the “Planwerk Innenstadt” (Inner city plan) in 1996, a need for precise, up-to-date and building-specific digital working plans emerged. The Senate Department for Urban Development’s digital city model of Berlin was produced for this purpose and is being continually developed up to the present day. The CAD master maps were produced using the Automated Property Map (ALK-Berlin) as a basis and finalized using comparisons with aerial photographs and current information from construction and planning activities. Buildings were assigned various different colours: In the above left illustration (status 2012), the building stock up to 1990 is grey, new constructions dating from 1990 to 2012 are brown and planned construction areas are yellow.

With the help of a computer it was possible to calculate a three-dimensional isometry without any perspectival distortion. This ‘neutral’ view over the city does not favour any single building or city district: All building appear at the same scale. An isometric viewing angle like this cannot be generated using conventional aerial photographs taken from an aeroplane because the distance between the aerial camera and the surface of the city is insufficient.

Aerial image isometry is the attempt to combine the images produced by a satellite camera which lack a vanishing point perspective (taken from an apparently infinite distance) with the sharpness of conventional aerial photography. With the means of a complicated photomontage process, numerous small sections from oblique aerial images – taken by the BLOM company in 2006 – were put together to form an ensemble. The isometry of the digital city model served as an optical foundation and construction grid. In this way, the aerial images were deformed in such a way that the presentation of the buildings seems to defy the laws of perspective.

This novel form of photomontage is an attempt to forge a link with the images of Mars that Thomas Ruff processed in 2010 and which are included in the collection. The isometric viewing angle of the centre of Berlin reverses the viewer’s perspective, however: If Ruff’s ingenious manipulation of NASA satellite images can be interpreted as a highly poetic search for life far from earth, thus the aerial image isometry of Berlin, because of the theoretical endless distance of the observer, can be read as an extraterrestrial’s first sighting of our civilisation.